PTT Global Chemical (PTTGC)increased heat recovery in a preheater for a distillation column in one of its aromatics plants by replacing a shell-and-tube heat exchanger with an Alfa Laval Compabloc. The result was 10% lower steam consumption in the column’s reboiler and lower maintenance costs. PTTGC is very satisfied with the results and feels confident in using Compabloc for upcoming heat recovery projects. 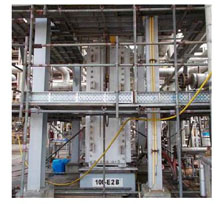 PTTGC runs an ambitious programme for continuously improving its plants' energy efficiencies and reducing CO2 emissions. Over the last three years the company has reduced its annual CO2 emissions from its Aromatics Complex 1 plant by over 2,000 tons, and saved 1.7 million Euro on steam and electricity costs.

PTTGC had good experiences from a previously installed Alfa Laval Packinox heat exchanger and asked Alfa Laval to investigate the possibilities to increase heat recovery in its Aromatics Complex 1 plant. The plant produces a number of chemicals including paraxylene, benzene and cyclohexane. After the investigation was concluded, it was decided that the first step would be to replace an existing shell-and-tube for an Alfa Laval Compabloc compact heat exchanger to increase heat recovery in the plant's feed fractionation unit (FFU). As a result, steam consumption in one of the reboilers in the FFU dropped by approximately 10%. Apart from saving energy, the new heat exchanger significantly reduces maintenance costs. The old shell-and-tube suffered from a fouling rate that was eight times higher than that of the new Compabloc, resulting in less frequent cleaning. Reduced fouling not only cuts cleaning costs, it also means heat recovery is at a consistent, high level.

PTTGC is very pleased with the outcome and the support from Alfa Laval. The company has already taken the next step and has replaced an air-cooled condenser on one of the FFU distillation columns with an Alfa Laval Compabloc to recover heat from overhead
vapours and use it for preheating the feed even more.

The aromatics production process uses heavy naphtha as raw material. The feed going into the plant is Full Range Condensate (FRC), a mix of different hydrocarbons. The first step is to separate the heavy naphtha (with 6 to 9 carbon atoms) from lighter and heavier hydrocarbons. 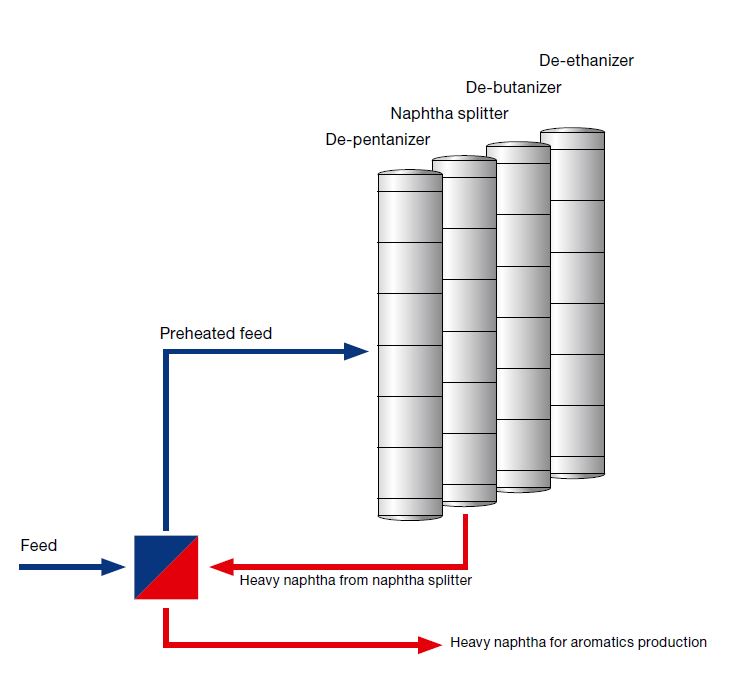 The operating data shows that the Compabloc heat exchanger outperforms the previous shell-and-tube. Table 1 shows the average inlet and outlet temperatures for the shell-and-tube and the new Compabloc.

The cold approach temperature (CAT) is the temperature difference between the outgoing stream on the hot side and the incoming stream on the cold side. A small CAT means as much as possible of the heat has been recovered. The average CAT for the Compabloc is 9°C (16°F) compared to 25°C (45°F) for the shell-and-tube. To maintain this average CAT for the shell-and-tube, the unit had to be cleaned much more frequently than the new Compabloc due to its much higher susceptibility to fouling.

The compact, fully welded Compabloc heat exchanger is designed to operate with a wide range of aggressive media and at high temperatures and pressures.

PTT Global Chemical is Thailand’s largest and one of Asia’s leading integrated petrochemical and refining companies. The company has a production capacity of 8.2 million tons of olefins and aromatics, and 280,000 barrels per day of petroleum.
Thanks to its work with energy efficiency at the Aromatics Complex 1 plant, PTTGC reduced electricity consumption by 706 MWh, cut steam consumption by more than 85,000 tons, and lowered CO2 emissions by 2,000 tons. In total this has saved the company approximately 1.7 million Euro. PTTGC was awarded the 2011 Energy Conservation Award for Best Designed Factory in Thailand, organized by the Department of Alternative Energy Development and
Efficiency, Ministry of Energy, for its work with the Aromatics Complex 1 plant.